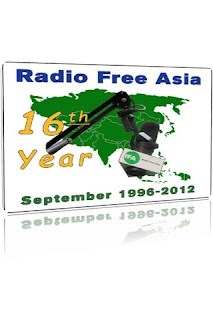 Radio Free Asia (RFA) announces the release of our 16th anniversary QSL card.
RFA’s first broadcast was in Mandarin on September 29, 1996 at 2100 UTC.
Acting as a substitute for indigenous free media, RFA concentrates its coverage
on events occurring in and/or affecting the countries to which it broadcasts.
Those countries are: Burma, Cambodia, Laos, North Korea, Peoples Republic of
China, and Vietnam.
The design was chosen the favorite over four others posted on our Facebook page,
RFA QSL. The microphone and flag is typical of what our broadcasters use in our
Washington DC studios.  This card will be used to confirm all valid reception reports
from September 1 – December 31, 2012.
Reception reports are also accepted by email at qsl  (@) rfa.org, and for anyone without Internet
access, reception reports can be mailed to:
Reception Reports
Radio Free Asia
2025 M. Street NW, Suite 300
Washington DC 20036
United States of America.
Upon request, RFA will also send a copy of the current broadcast schedule and a station sticker.
Best wishes from all of us at RFA. Thx AJ
AJ Janitschek Radio Free Asia
Via @yimbergaviria
Publicado por C.DX.A - INTERNACIONAL A las: 21:31