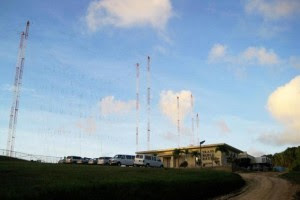 
HAGATNA, GUAM (BosNewsLife)-- Global Christian broadcaster Trans World Radio (TWR) was heard "louder than ever" across Asia Monday, November 21, after inaugurating two transmitters it hopes will help to reach "millions more people" including "persecuted" Christians in countries such as China.

TWR President Lauren Libby hosted what he called "a live dedication" of the network's two new 250,000-watt shortwave transmitters on the pacific island of Guam.

The transmitters replace the older 100,000 watt facilities giving "TWR the opportunity to touch even more lives with the good news of Jesus Christ," he said. "We thank God for the privilege of increasing our spiritual footprint in Asia" via the 15.4 megahertz in the 19 meter band, the official added.

The $690,000 needed for the transmitters was raised by individual Christians and affiliated Christian networks in the United States, which also aired Friday's inauguration broadcast, TWR announced. "These upgraded transmitters will more than double our current broadcast power across Asia," said Libby.

Additionally, they can broadcast in both "analog" and "digital" modes. Digital shortwave will enable TWR to reach both rural areas and large cities with a strong “near FM” quality signal as they are known to reduce fading and interference associated with analog transmissions, TWR explained.

Mike Tirone, senior president and general manger of KCBI, a Texas-based TWR affiliate, said he hopes the network will also be able to better serve those who are persecuted for their faith in Communist-run China.

"The people of China can not worship freely and they are persecuted," he explained. "I am so excited that now they are going to get the spiritual food and that this is going to help them grow [in God's Word]. Heaven is smiling on the island of Guam tonight..."

Tirone said he noticed while visiting Christians facing difficulties in China that "they are full with joy" just as Apostle Paul when writing from prison as described in Bible book Philippians. China's government has consistently denied wrongoing, saying Christians are free to worship within the state-approved churches, but rights groups say many of the estimated 130 million Christians prefer to worship outside government control, often in home churces.

Tirone said he is convinced that TWR's new transmitters will help "millions of people in China to know the truth of God's work."

From Guam, TWR broadcasts to what it calls "numerous unreached groups," including Han Chinese and Cantonese as well as people in North Korea, Burma, and Vietnam who "are largely unreachable except by way of shortwave radio."

Also within range of Guam’s broadcasting site are India and Indonesia who receive "numerous programs in multiple languages," TWR said.

Tirone urged company executives and others to become involved in TWR's mission. "When Jesus saw the sea of lost people, he wept. We need to care about what the Lord cares about."

Founded in 1952, TWR broadcasts from 14 countries as well as through local radio stations, cable, satellite, and the Internet, reaching millions of people in 160 nations in over 200 languages and dialects. It claims to receive over 1.5 million letters annually.