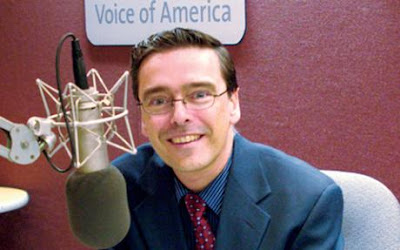 Washington, D.C. — December 8, 2011 — Buenos Días America, Voice of America’s popular Spanish language radio program, marks its 50th anniversary of broadcasting to Latin America Friday, with a tribute to the pioneers of the show and the historic events they covered, including the death of President John F. Kennedy and the Apollo moon missions.

The live half-hour VOA program, which is broadcast throughout Central and South America on AM and FM affiliate stations and satellite, is also available on podcasts, the VOA website and on mobile.

Show co-hosts Luis Facal and Betty Endara dedicate the first half of Friday’s program to the anniversary, with comments from listeners and station managers and stories about the personalities that make the show one of the most well-known radio programs at VOA.

For a quarter of a century Buenos Días America was hosted by the late Jose “Pepe” del Rio, one of VOA’s best known and most beloved radio personalities. Del Rio, who charmed audiences from 1961 to 1986 with his engaging style, was known to both presidents and working people alike, and entertained his audience with an easygoing mix of informal banter, international news, and live telephone interviews.

The Director of VOA’s Latin America Division, Alberto Mascaró, says “Buenos Días America has a long history of informing and entertaining people in the region, a legacy that will be carried into the future by VOA’s team of talented broadcasters.”

VOA’s Spanish Service produces a range of radio, television and Internet programs for the Latin American audience. Visit the VOA website at www.voanews.com for more information about the Spanish Service or any of our other language services.

For more information about this release contact Kyle King at the Public Relations office in Washington at kking@voanews.com.

Print this Email this to a friend ShareThis
The Voice of America is a multimedia international broadcasting service funded by the U.S. Government through the Broadcasting Board of Governors. VOA broadcasts approximately 1,500 hours of news, information, educational, and cultural programming every week to an estimated worldwide audience of about 141 million people. Programs are produced in 43 languages and are intended exclusively for audiences outside of the United States.