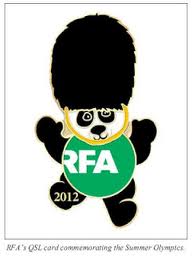 ®
RADIO FREE ASIA COMMEMORATES THE 2012 LONDON OLYMPICS
JULY 2012
Radio Free Asia announces its 46th QSL card scheduled for distribution for all confirmed reception reports dated July-August 2012. This QSL card commemorates the 2012 Summer Olympiad in London, England which will be held July 27 through August 12, 2012. The Games have always brought people from around the world together in peace to respect universal moral principles. The card shows an adaptation of the graphic of Radio Free Asia’s Olympic pin, as created by RFA’s Brian Powell, which was originally used for the 2008 Beijing Olympics. This latest version adds a bearskin which is traditionally worn by the British Foot Guards.
RFA’s QSL card commemorating the Summer Olympics.
2
RFA is a private, nonprofit corporation that broadcasts news and information to listeners in Asian countries where full, accurate, and timely news reports are unavailable. Created by Congress in 1994 and incorporated in 1996, RFA currently broadcasts in Burmese, Cantonese, Khmer, Korean to North Korea, Lao, Mandarin, the Wu dialect, Vietnamese, Tibetan (Uke, Amdo, and Kham), and Uyghur. RFA strives for accuracy, balance, and fairness in its editorial content. As a ‘surrogate’ broadcaster, RFA provides news and commentary specific to each of its target countries, acting as the free press these countries lack. RFA broadcasts only in local languages and dialects, and most of its broadcasts comprise news of specific local interest. More information about Radio Free Asia, including our current broadcast frequency schedule, is available at www.rfa.org.
RFA encourages listeners to submit reception reports. Reception reports are valuable to RFA as they help us evaluate the signal strength and quality of our transmissions. RFA confirms all accurate reception reports by mailing a QSL card to the listener. RFA welcomes all reception report submissions at www.techweb.rfa.org (follow the QSL REPORTS link) not only from DX’ers, but also from its general listening audience. If you have a smart phone, feel free to use the QR code below to access the automated reception report system and submit your reception reports to the web site.
You also have the option of using the following Microsoft Tag from your smartphone. The free mobile app for your smartphone is available at http://gettag.mobi.
Reception reports are also accepted by email at qsl@rfa.org, and for anyone without Internet access, reception reports can be mailed to:
Reception Reports
Radio Free Asia
2025 M. Street NW, Suite 300
Washington DC 20036
United States of America.
Upon request, RFA will also send a copy of the current broadcast schedule and a station sticker.