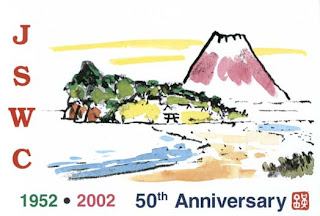 De:
"Dario Monferini"
Añadir remitente a Contactos
Para:
"PLAYDX2003"
[Más abajo se incluyen archivos adjuntos de Dario Monferini]
﻿
Dear friend Toshi,
all the best wishes for the JSWC 60 years anniversary !
from playdx editor
Dario Monferini
Dear radio friends,
Please see the attached files which are Bulletin cover and DX News of the month.
The first topic is Tokyo HAM Fair 2012. This annual event is to be held on 25th and 26th of August at Tokyo  Big Site.  JSWC will open our own booth to promote short wave radio  listening.  Our booth number is J-45.  We will have a special lecture  during the Fair.  The topic to be presented is radio world topics in  the past 10 years by Mr. Akabayashi, an administrator of Gekkan Tampa,  a popular monthly short wave news on the web. This year is our club’s 60th anniversary, so we will have a big  celebration party at Hotel Sun Route Ariake in the evening of 25th  during the HAM Fair. We anticipate many club members and foreign  broadcasters to join the party. We are also planning to print the booklet titled JSWC’s 60th  Years in Japanese to cover 10-year activities of the club and various  radio topics in the past 10 years, as we did for our 50th anniversary  book, which covered 50-year activities.  Both 50th anniversary and  60th anniversary books will also be published in CD format at this  occasion. These are only in Japanese. Special radio programs celebrating 60th anniversary are in progress.   During the month of July, HCJB Japanese Service aired 3 special  programs, and KBS World Radio aired a special program on 17th of  July.  All of these programs were in Japanese.  We are planning to  broadcast a special English program sometime this fall, and the  schedule will be announced when the detail is defined.  A special QSL  card will be issued. This is all for this month and hope you enjoy this.
Toshi Ohtake,
Japan Short Wave Club
JSWC, P.O.Box 44, Kamakura 248-8691, Japan.
DX NEWS     Listing by frequency (kHz)     All times in UTC           August 2012
■■ Long Wave ■■
279  R. Rossi, Russia . June 15 at 1358- 1423 in Russian. SIO454. Talk. ID and Time Signal at 1400. (Kikuchi)