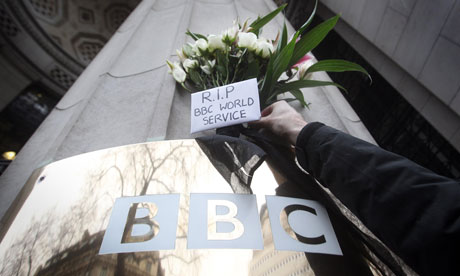 Protesters last year outside Bush House, London, after the BBC confirmed plans to axe jobs. Photograph: Lewis Whyld/PA Wire/Press Association Images
BBC Trust approves plan after government asked World Service to generate £3m from commercial activities by 2013/2014
The BBC Trust has approved plans to run advertising on a number ofBBC World Service websites as well as in radio broadcasts for the first time in the corporation's history.
BBC World Service has been given the green light to run ads on the Arabic, Russian and Spanish websites, which the trust says will put it "on a par with the BBC's international-facing website BBC.com".
The World Service, which has seen its budget slashed by £46m a year resulting in more than 600 job losses, has been asked by the government to generate £3m from commercial activities by 2013/2014.
Helen Boaden, the director of BBC News Group, presented two commercial proposals to the BBC Trust, according to minutes for a meeting on 17 November published on Thursday, that aim to go some way to supplement the grant-in-aid the BBC World Service receives from the Foreign and Commonwealth Office.
Plans to launch advertising on BBC.com faced fierce criticism from some sectors of the media industry, nevertheless ads have been running on the website since late 2007.
The BBC Trust also rubber stamped a plan to launch a year-long pilot to run ads in World Service English programmes on its Berlin FM station.
If successful the pilot could pave the way for widespread advertising on BBC World Service radio services for the first time.
"We are adopting a careful and measured approach, with these proposals deliberately contained so we can assess how they work in practice," said a spokesman for the BBC World Service. "While it could make a difference, this would only contribute a small proportion towards our overall funding.
"The BBC has a track record of managing commercial activity through BBC World News TV and the international BBC.com website, and the BBC's reputation for providing impartial and independent news will always take precedence over wider commercial goals."
The BBC World Service made about £4.6m from activities such as programme co-productions with third parties in the year to the of March 2011, however this is a behind-the-scenes activity users and listeners of the services would not have noticed, unlike advertising.
SOURCE:http://www.guardian.co.uk/media/2012/jan/05/bbc-world-service-ads?newsfeed=true
Via Yimber Gaviria, Colombia
Publicado por C.DX.A - INTERNACIONAL A las: 19:26