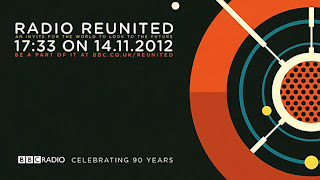 Para:
"Alokesh - Gmail"
CCO:
playdx2003@yahoogroups.com
The BBC today announced plans for an unprecedented global simulcast across its radio networks – including every UK station (local, network and national) and many World Service outlets – curated by Damon Albarn to mark 90 years of radio.
The simultaneous broadcast, called Radio Reunited, will take place on November 14 at 17:33 GMT – 90 years since the first broadcast from the British Broadcasting Company in 1922 - to a potential global audience of 120 million people across every inhabited continent which includes
BBC World Service outlets, including Arabic, Swahili, Hausa, English Language services.
Listeners can find out more about the project and how to get involved at ﻿bbc.co.uk/reunited
The website will also showcase the best of the messages contributed by members of the public once the project is completed. Listeners will be encouraged to use the hash tag #bbc90 if tweeting their message.
More at :
http://www.bbc.co.uk/mediacentre/latestnews/2012/radio-reunited.html
---
Alokesh Gupta
New Delhi
Publicado por C.DX.A - INTERNACIONAL A las: 20:01